Live longer, live with a dog!

Published in the highly regarded scientific journal Nature*, a team lead by Professor Tove Fall at Uppsalla University in Sweden have completed the largest study of its kind: they tracked 3.4 million over forty year-olds and found that dog owners live longer and have a 20% lower risk of early death from cardiovascular disease than non dog owners! This effect was amplified for those that lived alone with a dog – rising to a 33% lower mortality. This effect dwarfs the results of benefits seen in many of the drug trials on statins and blood pressure treatments.

Can we believe this study?

3.4 million Swedes between the ages of 40 and 80 were included and followed-up for 12 years looking for causes of death linked to cardiovascular disease, heart attack, heart failure or stroke. (The researchers excluded those residents who had evidence of pre-existing heart disease when their public health records were checked – this was possible because all Swedes are registered are covered by their public health system in the same way as UK residents are by the NHS in the UK.)

Each Swede was linked to dog ownership because since 2001 it has been a legal requirement to register and microchip their dog with the government. Potentially confounding factors** such as smoking, obesity and socio-economic factors were taken into account and the study was also benchmarked looking at the outcome of twins within the population who did or didn’t live dogs and their mortality.

This is a strongly designed scientific study involving an entire population and the statistical analysis showed mathematical confidence in the results achieved. 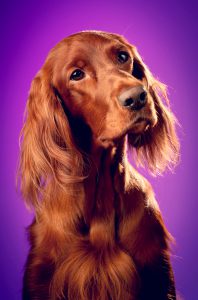 Why does owning a dog prolong life?

This study doesn’t answer this question, however the authors do hypothesise about the mechanisms. The large health benefit seen in those living alone may imply that the companionship reduces stress and motivates people to undertake healthier activities such as regular exercise. Indeed, when the dog owning Swedes were analysed, the dog breeds that provide the biggest health benefits were those dogs that needed the greatest exercise – such as terriers, scent hounds and retrievers.

There may also be other less obvious causes other than dog owners having better blood pressure. Professor Fall speculates that living with dogs alters the owners exposure to different bacteria possibly boosting their immune systems.

Although cats can certainly offer companionship and help to reduce stress, they offer little in everyday motivation to exercise. When asked about further research into cat ownership and the risk of heart disease and death, Prof Fall replied that unfortunately there was no national cat register in Sweden – but a study looking at horse ownership  was a possibility!

*Read to the full scientific paper in Nature here.

**Confounding factors are those that can falsely influence the outcome of a scientific study either positively or negatively.

Sometimes interpreting medical information and making the best decisions can be daunting and complicated. Our private patient advocacy service provides easy access to top UK health experts. We guide our patients with genuine choice and trust, offering a bespoke service – for anyone in the world seeking private UK healthcare. Find out more here.