How much plastic are we eating?

From that Blue Planet 2 episode to the war currently being waged on plastic straws, it’s obvious that our excessive plastic use has lead to a crisis. And as landfills and rubbish dumps fill up and up, research about the harmful effects of plastic on human health has started to emerge.

Why is plastic so dangerous for human health?

The University of Exeter recently published a study in which they found that 86% of teenagers have traces of Bisphenol A (BPA) in their bodies. BPA is a chemical that makes up certain types of plastic. Everyday items such as water bottles, drinks cans and food containers commonly contain BPA. As you might expect BPA finds its way into human bodies through our diet, particularly if we eat a lot of highly processed or packaged food.

We need to undertake more research to fully understand the effects of BPA on human health. However the same research team at Exeter proved that BPA has an effect on hormone regulation. This could in turn have a negative impact on male fertility and cause early sexual maturation.

The other main culprits are chemicals that fall under the Phthalates category, for example materials such as di-n-butyl phthalate and (di-2-ethylhexyl) phthalate. These are as easy to pronounce as they are good to have in our bodies. Phthalates are present in the PVC plastics that often make up food containers and other hard packaging.

The use of some phthalates is banned in the production of children’s toys in an effort to reduce their harmful effects. Like BPA, Phthalates can disrupt the endocrine system (the system that secretes hormones), and have also been linked to conditions such as cancer, obesity and diabetes. However, as before, scientists widely acknowledge that we need more research on the effects of Phthalates on human health.

It’s eye-opening stuff- and this information is just the tip of the iceberg. After all, plastic doesn’t just enter our bodies through our food containers, but through our natural environment as well.

How does plastic harm the environment…and what does this mean for us?

Up to eight million tonnes of plastic enter the ocean every year. If you can’t quite fathom how much this is, check out these images taken by underwater photographer Caroline Power: 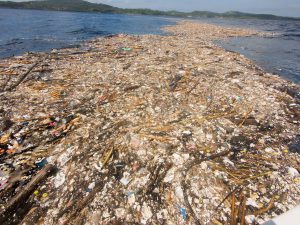 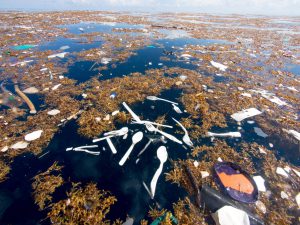 Power’s photos are indeed powerful, but they don’t reveal another threat- microplastics. Microplastics are extremely small pieces of plastic which range from 10 nanometers to 5 millimeters in size. Fish and shellfish often mistake them for food, and are then caught themselves for our food. Microplastics enter our food chain just like that.

However before we start panicking, it’s important to remember that, as with BPA and Phtalates, the effects on our health are not fully known or understood. It’s yet another reason to consider our mass consumption of marine life, especially when fish stocks are depleting worldwide.

In fact, there are far more effective courses of action to take.

There’s no denying that the effect of plastic on the environment and our health is a serious matter. However, it’s clear that we need more research to fully understand the severity of the problem.

For now, reducing your plastic use and consumption of plastic-packaged food is the best course of action to take. Swap plastic food containers for their metal or glass counterparts, stop buying plastic water bottles and invest in a non-disposable alternative and try to buy food with less packaging when possible. While we wait for more research on the relationship between plastic and your health to come through, these actions will minise your risk- and help to keep all those beautiful sea creatures on Blue Planet 2 safe and happy as well.